I learned rather early in life that I wasn’t made for hard, physical work. All it took was one long hot day of baling hay by hand in a t-shirt. Never wear a t-shirt when baling hay. It took a number of years later to realize that I wasn’t made to be a police officer. It’s dangerous, very difficult, and nowadays very unappreciated. It’s also a very necessary job. It’s that thin blue line that separates chaos from safety.

Imagine pulling a car over for a traffic stop at 2:30am, and not knowing what you will encounter. Or being called to a domestic disturbance, or a burglary, or shots fired. Police officers run towards what most of run away from.

My wife’s dad was a police officer in Muncie, Indiana for 42 years. You have to really like what you do, to do it for that long, or maybe you just do it because it becomes who you are. He could have written a book, as is the case with just about every police officer.

I, along with my wife, had the opportunity to participate in Naperville’s Citizen Police Academy, along with about 25 other folks. It’s a nine week program that flies by, along with each 3-hour class. It is without a doubt among the best 27 hours of time I have ever invested. Many communities throughout the country offer the program, which is designed to acquaint individuals with activities of their local police department. Graduates become more aware and better informed about how the police department works.

The link below will give you an overview of Naperville’s program:

The following is a week-by-week view of the program’s content: 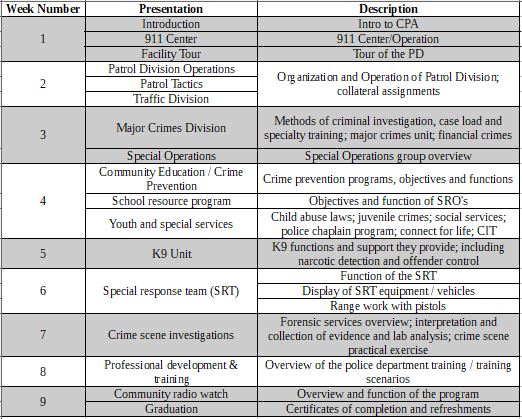 In a nutshell, Naperville does it right. The program is not just a NPD task or a service, it’s a commitment and a passion on their part. Every aspect of Naperville’s Citizen Police Academy (NCPA), is done with respect and class. Members of the Naperville Police Department are outstanding representatives of their profession, and of the city.