It seems too easy for Naperville city council members to raise electric and water rates. All it takes is a city council meeting, where they talk endlessly about the perceived need to raise utility rates, take a vote which typically ends with a unanimous decision to jack up the rates on businesses and residents in Naperville, then adjourn giving each other high-fives, and off to downtown Naperville to pound down a few brews at a local pub, while the fine folks of Naperville are left to dig deeper into their wallets to cover the rate increase.

For the fine folks of Naperville, it means maybe fewer nights out on the town for a meal, or having the kids wear their shoes a year longer, or dropping the music lessons for the school year. The folks feel the squeeze, but council members go on their merry way unscathed.

Naperville city council members should be required to put some skin in the game of raising utility rates; throw a little money in the pot to help offset the rate increase, even if it just a couple of bucks. Do it as a sign of good faith, or as council member Becky Anderson stated when the topic of ‘sanctuary city’ surfaced during a recent council meeting and she referred to Naperville as a “welcoming city to all”, followed by ” more symbolic than anything”.

What could council members, along with the city manager, do that would be ‘symbolic’. The answer is auction themselves off to the highest bidder with the money raised going to the electric and water utilities thereby lowering residents’ monthly utility bills by a penny or two. Granted, it’s not much, but it’s a symbolic gesture. Make it a big event like the mayor’s State of the City shindig, or better yet, have the auction outside the Municipal center near the steps leading to the building and using loud speakers along with the Municipal Band for the festivities.

The key for the success of the auction is for each council member to ‘sell’ his or her unique attribute, something they are really good at doing. Here are a few ideas:

City manager Doug Krieger does a great Abraham Lincoln and wow, can he dance, or he could be a doppelganger for Ming the Merciless, 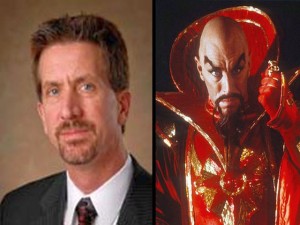 but his real gift is teaching the art of double-talking, 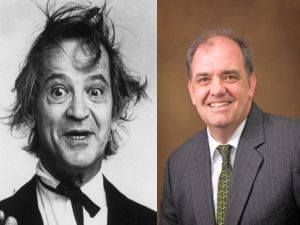 Councilwoman Anderson’s quest to ‘welcome all’ to Naperville could open her home, business, and office space at the Municipal Center to anyone needing a ‘sanctuary’

Councilman John’s Krummen could entertain bar patrons with his ability to turn his head 360 degrees as he did when he, as the smart meter ambassador, addressed the city council in front of him and the audience behind him at the same time from the podium. Not advised for children to see; it could scare them.

Councilman Paul Hinterlong’s  could teach his uncanny ability to turn every comment into a question.

Councilwoman Rebecca Obarski could auction off her amazing ability to stand in hurricane strength wind and never get one hair out of place, while remaining totally composed.

Councilwoman Patty Gustin could auction off her ability to mesmerize anyone listening to her, by saying so little with so many words.

Mayor Steve Chirico could auction off his wrestling talents including body slams, pile drivers, head locks, half-nelsons, and his specialty of turning his opponent into a battering ram breaking down steel doors. He could charge $10 per opponent and make over $1,000 in a night towards Naperville utilities.

After the auction the municipal band could lead everybody downtown, with the council, to pound down a few brews.