Maybe The Appearance of Recycling Is The Answer

Well I ordered my recycling cart this week. I chose the 64-gallon one, which is just big enough to store my birdseed, basketballs, and baseball bats. For a $36 investment, ($3 per month for 12 months), you can’t find a better cart at Home Depot or Menard’s to store stuff. It’s a steal. Now all I have to do is wait for the magical day sometime this fall when my beautiful, sturdy, blue cart arrives. The more I thought about the uselessness of recycling, the more I realized that city officials might be missing a golden opportunity.

Naperville city officials never think of creative ways to ‘earn’ money for the residents. How cool would it be, if city council members held a bake sale, or car wash to raise money to buy some recycling carts for those less fortunate residents who can’t afford a cart. That would make the front page of the local paper, and it might even appear on GMA (Good Morning America). That surely would help their re-election, though probably not enough to get re-elected.

However there is something that they could do to absolutely guarantee re-election. Heck, I’d even vote for each incumbent, including Wehrli, Fieseler, and Brodhead. Even if they’re not running, I’d vote for them as write-in candidates.

First, let’s look at why each incumbent has an uphill climb in this next election. This could take a long time, so in the interest of expediency, we can put it all under one umbrella….the Naperville city council as a whole, has lost credibility. Residents have lost faith and trust in city officials.  Most members of the city council, lead by the city manager, have lost the confidence and respect of knowledgeable residents.

The electric department borrows money from the water department, water borrows from electric, rates increase, 30-year contracts by city officials handcuff residents, downtown Naperville has become ‘fight night’ nearly every night, so-called Smart Meters are forced upon residents, who then get arrested, city hall is accused of being a ‘hostile’ work environment, the city manager is accused of behavior that he should have been guarding against,  and on and on.

So what can city officials do, that will make residents forget all of the above, and guarantee a standing ovation every time they enter a room, including a washroom.

The answer is the massive ‘appearance’ of recycling. Recycle everything from everybody (including me), from everywhere.

Let’s re-look at a video from Watchdog’s last posting to set the table.

That’s right. Order a half-million recycling carts so that every household has 9 recycling carts lined up along the curb. No need to bring them back into the garage, or along-side the house. Now charge each household $3 per month per cart ($27 per month) X 12 months X 52,270 households (according to Naperville’s website), that equals nearly $17 million yearly. Keep charging every month forever, or until the Cubs win the World Series (which is the same).

Here is the trade off that residents will love. No more electric bills for residents. So instead of paying an average electric bill of $100 per month, they are paying only $27 per month for the 9 carts. Two words, methane gas.

Let’s re-look at the following clip

So you ask, “Well how is that going to work? If you use a landfill, what’s the purpose of the recycling carts?” The answer is simple. You need the carts for the city to get the $17 million yearly, and the recycling carts make people ‘feel good’ about recycling. Then 9 different colored recycling trucks, gather the contents, and then dump the contents in the landfill. Who cares where it goes, as long as it’s making methane gas. Everybody wins. City officials get re-elected and standing ovations, residents get ‘free electric’, no more Smart Meters, no-more 30+ years of outrageous contract obligation, the cart manufacturer becomes a recycling cart-making machine, those who like to recycle can put lightly-soiled toilet paper in the brown container, and the multi-colored carts lining the streets of Naperville can help prevent the snow plows from knocking over mail boxes in the winter, saving even more money.

The Naperville city council, along with city manager Doug Krieger can finally do something to help residents, and restore city officials’ credibility. I’m ready to sign-up for the other 8 colors. 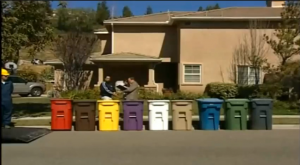