It was that I actually fell asleep while watching the Naperville city council meeting in the ‘friendly confines’ of my own home. Yes, the Watchdog who has been critical of council members dozing off at the dais over the last few years, finally had it happen to himself. I now understand why city staff heads tilt during meetings. I also owe an apology to the ‘dozing-off’ council member who is no longer on the council. It’s likely he has taken his ‘dozing’ elsewhere to some other government meeting.

I could blame it on lack of sleep. I went to bed at 2am, then got up at 4am to go to the airport, but I won’t do that. If I did, I’d be just another victim with no accountability. In other words, a candidate for public office.

I do remember a couple of things about the meeting before dozing off. First, the council started the meeting late again. You would think that with 11 people sitting at the dais, one of them would have enough respect for other peoples’ time by corralling their peers and getting the ‘show’ started on time. 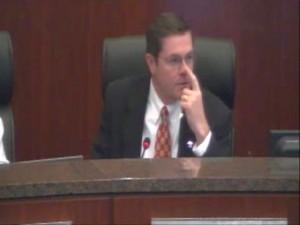 Then I remember seeing councilman Grant Wehrli looking more and more like a candidate for state office. He must have read the pamphlet ‘How to look like you know what you’re doing’, when in fact you’re clueless’. It helps to be clean shaven, slicked-down hair, fresh dark suit, whiter-than-white white shirt, and a lapel pin. He is running un-oppossed for office, so might not need the lapel pin. 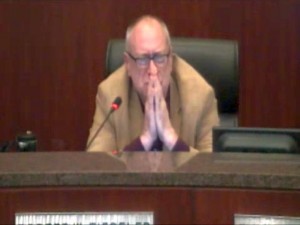 Then I remember seeing councilman Bob Fieseler (affectionately aka the ‘human coat hanger’) appearing to be in somber reflection, or trying to calculate his pension.

In Bob’s defense, it’s very possible that in his haste to get to the meeting on time, he forgot to take his sport-coat off the hanger before putting it on.

The final thing I remember is what turned out to be the most exciting and energizing portion of meeting.

I was only ‘gone’ for about 20 minutes, and awoke to watch the remainder of the meeting. Afterwards, I watched the portion that I missed.