Parades are fun and always worth a good laugh at some point of the procession. At this year’s Labor Day Parade in Naperville that point came when two-thirds of the Naperville city council appeared on a very cleverly decorated flat-bed trailer hauled by a gas-guzzling truck. It probably would have been more impressive if the nine-member council was stuffed into a two-door electric vehicle (like clowns in a telephone booth) in their effort to promote the convenience, practicality, and comfort of electric vehicles.

As you look at this picture of Naperville city officials, many questions come to mind. Questions like:

Where is Mayor Pradel, where is councilman Grant Wehrli, and somebody else is missing but who? 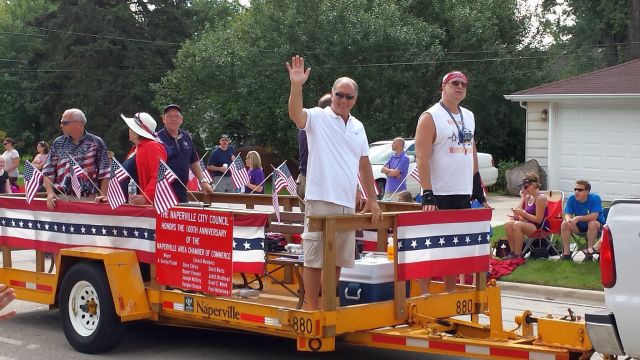 The big question, of course, is which of these council members looks like he lost a bet, because surely he wouldn’t dress like this by choice…would he? At the time councilman Fieseler probably thought it was a good idea, but then again he also thought Smart Meters and electric vehicles were good ideas too.

Then you have council woman Brodhead who looks like she should either be waiting for a bus on a street corner somewhere, or delusional thinking she is attending the Kentucky Derby,

Councilman Hinterlong looks as though he just got thrown out of Black Finn and is looking for a fight.

In the back by himself (just as he is in council votes) is councilman Doug Krause, astute enough to know where the camera is, and looking like he’s out for a day of fishing.

Then you have councilman Steve Chirico, the only announced candidate running for mayor, looking as though he should be the mayor; smiling, waving, acknowledging the camera, and dressed perfectly for the occasion, relaxed and confident.

Behind Chirico is either council member Joe McElroy or Dave Wentz. The residents don’t look very excited or even interested. If it wasn’t for the sign on the side of the flatbed, residents might think the riders are recent graduates of Elgin State Hospital, a rehab center somewhere, or a prison work-release program.

Then we spot councilman Grant Wehrli wearing somebody’s shirt and receiving a two-person standing ovation. That has to be depressing; a picture of utter despair. Was he not allowed to ride the council member flatbed, wasn’t he allowed to at least wear his own shirt. 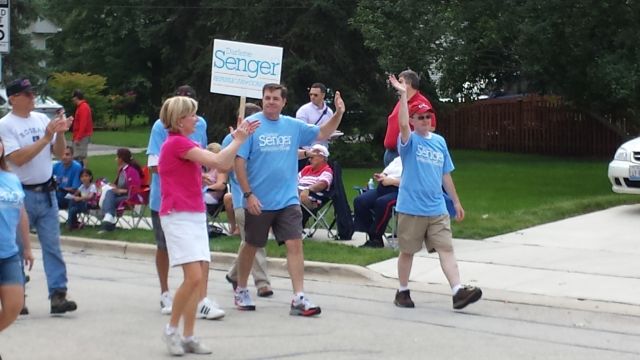 As the parade ends, we are still left with two questions: Who is the missing ninth council member, and what was councilman Fieseler thinking on Labor Day morning. Maybe he was thinking ‘Halloween’.

5 thoughts on “Which Naperville Council Member Lost A Bet”