“What Has America Become” is the title of a “Letter to the editor’ of the Iosco County News Herald, published on June 9, 2010 in the Opinion column. It was written by Ken Huber of Tawas City, Michigan. It contains a series of comparisons and contrasts which prompts one to consider the double-standards and conditions under which we now live in America. Though I am not in total agreement with some of his points, the general question he presents remains relevant. 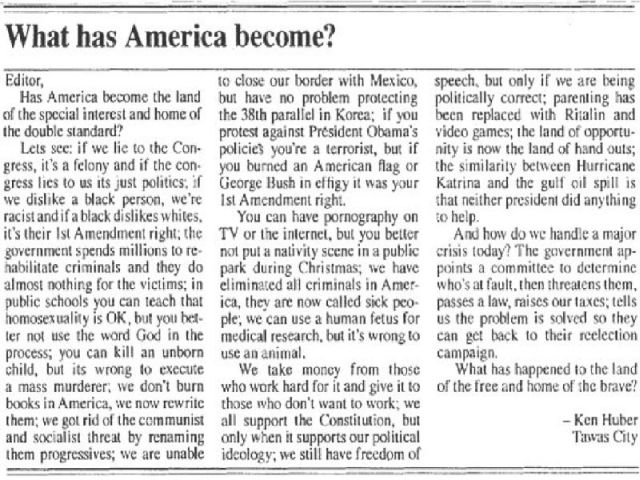 We can ask those same questions here in Naperville; What has Naperville become, and what has happened to the land of the free and the home of the brave. This couldn’t be more evident than in the case of resident Kim Bendis, when she was arrested under the direction and abusive power of Naperville city officials for protecting her family and home from the forced installation of a smart meter on her home.. Kim Bendis was also charged with documenting the city of Naperville’s forced entry onto private property; the same documentation that CBS Channel-2 News was recording. Another Naperville mom (Jennifer Stahl) was also cuffed and arrested at her home for protecting her home and family. Both women’s cases are working their way through the court system.

Naperville city officials have been relentless in attempting to persecute and “pound” these women into submission, as if they were pinatas or political toys of the Naperville city council, and specifically council members Grant Wehrli and Bob Fieseler who spearheaded the Smart Meter program orchestrated by city manager Doug Krieger.

In city official’s attempt to demonize the actions of both women, it hasn’t worked. In fact, councilman Grant Wehrli has decided to ‘run’ away for a state representative position distancing himself from the Naperville city council. It’s doubtful he can outrun the Smart Meter fiasco, and chances are it will follow him on his campaign trail. Any money donated to his campaign fund, might be better used at a casino, where the return on investment would be better.

As for Kim Bendis, she came to ‘the land of the free’ (see link below) and is now one of the “home of the brave”. The article in World Vision Magazine is both heart rendering and encouraging for both America and Naperville.