In theory, something new usually sounds exciting, especially programs started by Naperville city officials. One of the newest programs is called “Adopt-A-Drain”. Participants volunteering will be known as Drain Defenders, that’s pretty catchy. The first 100 people signing up for the program will be provided with a free pair of gloves, a nifty rake and a cool reflective vest. The vest comes in handy in case you get hit by a car and land along the roadside. It’s much easier to be located that way. The idea is for residents to select a drain and keep it clear of debris in order to prevent clogged storm drains and thereby minimize street flooding. It’s actually a good idea, even if it only clears one drain, (preferably the one near my home).

There are approximately 56,000 storm drains in the city, and 14,000 (25%) have been identified as culprits for causing problems. The city budgets $1.1 million yearly for inspecting, repairing, and maintaining drains, or about $20 per drain. If the program works, the program could be expanded to all 56,000 drains with 56,000 volunteers. No doubt volunteer training day at the Municipal Center would definitely be quite a site to behold.

The City of Naperville has another program though not volunteered fueled. It’s the annual leaf pick-up program which is underway now. Here is how the six-week program works. Beginning on October 15 and ending about Thanksgiving, every two weeks for three cycles, leaves which have been raked into the street at curbside will be picked up or pushed around the street. Which means the neatly raked mounds of leaves will either be “vacuumed up” by a truck or evenly redistributed back onto the street throughout your neighborhood. So a two-foot high mound of leaves will result in 1/4 inch of leaves covering the street. 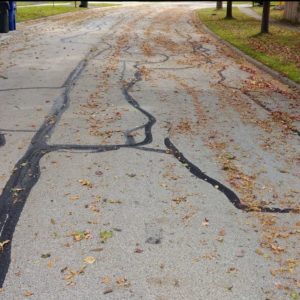 The leaf pick-up truck came by our neighborhood today. It’s easy to know it’s coming because it sounds like a WW-II German Panzer tank rolling through. If I didn’t know it was in the area, my two poodles would remind me when they run for cover. The truck picked up about half the leaves and the other half were re-distributed in front of my neighbors homes. Immediately afterwards, the garbage and recycling trucks came rolling through, smashing most of the remaining leaves into the pavement. It all seems to be well coordinated, with the end result being a newly brown colored street.

The real problem occurs if it rains before pickup, and leaves find their way to the drain. It’s even worse during the third cycle if it snows and covers the leaves including all the leaf debris covering the streets from the previous two cycles. There have been times when the third pickup did not occur due to weather conditions. Whatever debris remaining on the street finds its way to clog the drain.

So it comes down to this, it’s the Drain Defenders with rakes vs. the leaf re-distribution guys in German Panzer Tanks. If nothing else, city officials are providing great entertainment for guys like me.