The Cubs are down three games to none to the Los Angeles Dodgers in the best of seven League Championship Series. One more Dodger victory and the Cubs are toast.  You could say the Cubs have the Dodgers exactly where they want them if you’re an optimist.

The Naperville city council and the Watchdog have something in common. We all wanted last night’s council meeting to get over quickly. It turned out to be one of the shorter council meetings; 75 minutes to be exact. I watched the first hour of the meeting, and then recorded the final 15 minutes, so as to not miss the beginning of the game. I have my priorities in order.

Mayor Steve Chirico and councilman Kevin Coyne recused themselves during the meeting to avoid any conflict of interest on separate agenda items. Both left and returned very quickly. Chirico moved so quickly that if he would have been the last one to leave the chambers after the meeting, he could have turned out the lights and been in his car before the room got dark.

If the nine members of the Naperville city council and the city manager had a baseball team, the batting order might look something like this:

The lead-off person has to set the table and get on base, with speed and a show of energy. She does this during meetings and isn’t afraid to take an opposing view.

The center fielder is the leader of the outfield, quick, agile, in great shape, and sure-handed. Benny has played error-less ball since getting elected to his first term.

The catcher is the leader of team. Everything goes to and from the catcher and is involved in every play, often times getting hit with a pitch, a bat, or getting run over by a guy trying to score. If a kerfuffle breaks out, the catcher has to get things back in order.

First basemen are typically bigger, lumbering types of guys, hitting in the clean-up position. They swing a lot, hence striking out a lot, but when they connect, they nail it big time.

To say that Anderson belongs in left field is stating the obvious; many of her positions on the council are lefty-leaning. Left fielders get rid of the ball quickly, and Anderson is an expert at throwing the ball elsewhere.

It all starts with the pitcher, the most watched position on the field. The pitcher has to be in control and stay calm during pressure situations.

The third baseman makes long throws to first, hence can throw it wildly. No doubt that Gustin is long-winded and following her thought process can lead to the ball being overthrown. Third basemen have to react quickly without thinking and handle bunts and weird bounces, which makes Gustin a natural for this position.

Right fielders tend to be the last one picked on the playground, but don’t let that fool you. They need to have the strongest arm in the outfield with good accuracy. Hinterlong has developed into a strong right fielder on the council with outstanding accuracy.

Second basemen tend to have shorter range, and a weaker arm, with good reaction. Brodhead is perfect for second base.

Somebody has to make the decisions in the dugout, and that’s the manager, or in this case city manager Doug Krieger. Managers oftentimes find themselves out on a very tiny branch, with their decisions being second-guessed. 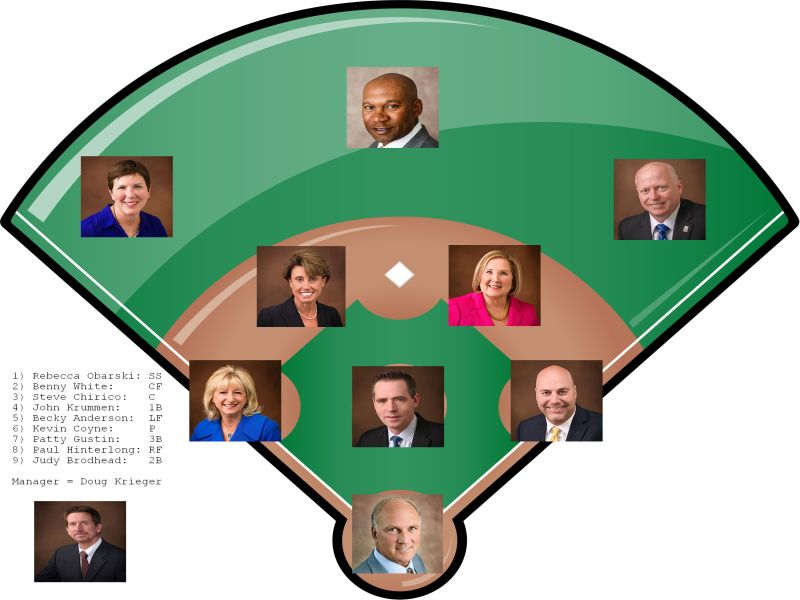