City officials  really wanted Caterpillar to choose Naperville as its global headquarters, but when the dust settled, Deerfield was the choice. Naperville came in somewhere between second and last place, again confirming that if you’re not first, you’re as good as last.

This must have been a bitter pill for Naperville city officials to swallow, considering that just this month, Naperville was chosen as the second best city in which to live. Last Wednesday Caterpillar released a news announcement stating Deerfield ‘gives our employees many options to live in either an urban or suburban environment’. Isn’t that what the second best city in the country also offers?

The announcement went on to state, ‘Deerfield was chosen because of it is approximately a 20-minute drive to O’Hare and convenient to Chicago via commuter train’. Naperville is also convenient to Chicago via commuter train, and it’s only a 35 minute drive to O’Hare (25 miles versus 16 miles from Deerfield). Is that 9 mile and 15 minute difference really the determining factor. Seems unlikely, and if it is, then why wouldn’t Caterpillar choose Mt. Prospect, Des Plaines, or Park Ridge, all of which are closer to O’Hare than Deerfield, and available to Chicago via train.

It is possible that Deerfield put a full court press on Caterpillar showing the ‘love’ that Naperville didn’t show. One of the problems in being chosen the second best city to live in, is complacency, resting on it laurels. 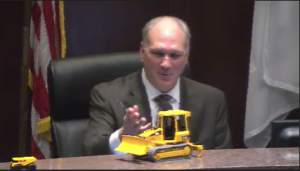 The little tiny one was placed in front of Naperville city manager, Doug Krieger; definitely not worthy of Krieger’s position, or of Caterpillar’s size.

Maybe what Naperville city officials could have done to emphasize its desire to be the home for Caterpillar would have been to do what former Mayor Pradel did to a Naperville building that he didn’t like,

except in this case the mayor and council members could have beat the livin’ daylights out of a small John Deere tractor. If you’re going to come in second or last place, you might was well make it memorable and do it with gusto.

2 thoughts on “Second Best City Not Chosen First By Caterpillar”