When you are thinking of driving into downtown Naperville do you think twice about it? Do you look at the clock and base your decision on the time of the day, or the day itself? Or how about this, do you catch yourself thinking about going elsewhere to get what you need or want, rather than downtown Naperville? I do all the above.

I’m retired, though I look at myself as being on a permanent, unpaid suspension, so you would think I have all the time in the world to get from point A (home) to point B (somewhere in downtown Naperville). I do have time, but I don’t relish sitting in traffic or crawling through Washington street.

When I lived in Barrington, I gave up going to Woodfield Mall; traffic and parking was miserable. I moved to Naperville in 1978, and years ago, I gave up going to Fox Valley Mall (now Westfield Mall) for the same reason. Shortly after that I began to avoid anything on Rt. 59. Now with downtown Naperville becoming more dense, my sphere of mobility is shrinking even more. I’ve determined that for me the best time to venture into downtown Naperville is Tuesday through Thursday from 10:22 am to 10:44 am.

Living in the southeast part of town, I utilize Weber road for wants and needs, along with Boughton road towards I-355. 75th and Naper is pretty good, but venturing north on Washington turns into a dismal, slow motion adventure.

I was in downtown Naperville last Wednesday at 10:30 am. I picked up what I needed (actually wanted) and left driving south on Main street. I noticed a sign showing a picture of the new Water street project, then I noticed the beginnings of the project being built (how could I miss it). The picture looked cool, but the reality of the project’s density gave me the heebee-jeebies. There’s a term you don’t hear much anymore.

Imagine that soon-to-be high density area, along with downtown traffic congestion on a Rib Fest or Last Fling weekend. There won’t be much room to move.

Naperville was recently profiled as the 14th worst traffic commute. 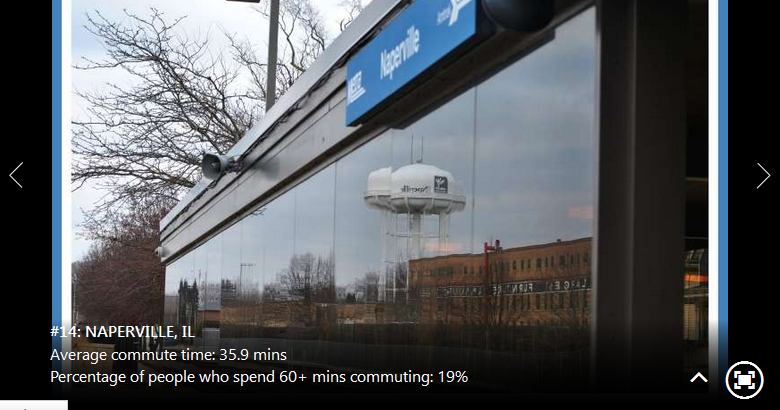 That’s amazing. How did Naperville avoid not cracking the Top-Ten. We surely will when The Project is completed. Could it be that we could surpass Chicago or Los Angeles. The odds are good that sooner or later it will happen if city officials keep increasing density without addressing traffic flow.

City officials took a huge step (not) when they worked up the courage to eliminate a few parking spots on Washington, as if that would make a difference. That’s like the Titanic slowing down the sinking process by tossing a few deck chairs off the ship.

If the Naperville city council wants to make a statement about improving traffic flow in the downtown area, they can start by eliminating all parking on Washington street. The merchants may whine and cry, but the traffic will flow.