Who Is The Snobbiest Snob Of Them All?

Well, Naperville made it onto another Top-Ten list; this time for being the fourth snobbiest mid-size city in America. This is another ‘accomplishment’ you will not find on the city’s website. The Chicago Tribune, Chicago Sun-Times and CBS-TV in Chicago reported the findings from the blog of real estate company Movoto, which ranked Naperville behind #1 Pasadena, California, #2 Thousand Oaks, California, and #3 Alexandria, Va.

The caption under the following picture from Movota, states “the snooty rule the city”, 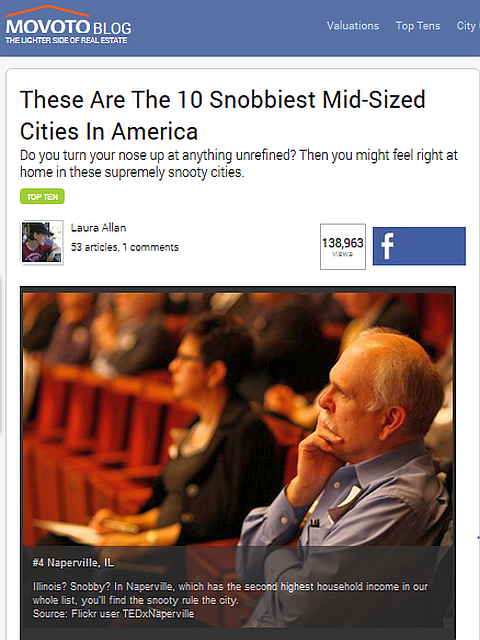 And who rules the city? The Naperville city council and city manager Doug Krieger. So you could say that city officials set the snobby direction for city, and you wouldn’t be wrong.

If we drill down a little deeper to find the poster boy on the city council for setting the benchmark for snobbery, councilman Grant Wehrli would easily win the trophy.

Watch and listen to last Tuesday’s city council meeting when Wehrli interrupts public forum speaker and resident Shannon Robb, when she attempts to respectfully begin her three-minute presentation regarding a downtown sound system.

Wehrli was more focused on protocol and procedure than to listening to what a resident had to say. He even tried to put her on the spot by ‘demanding’, ‘who told you, you could do this?” Fortunately the council over-ruled Wehrli’s outburst, and allowed her to continue. The good news is that Wehrli will no longer be able to say to another public forum presenter, “we’ve never done this procedurally’, because common sense prevailed and the resident was heard.

Wehrli’s mindset was probably established in high school, and it probably looked something like this:

Also during public forum, Naperville city council member Paul Hinterlong tried to ‘put the rush’ on speakers when he said the following:

Councilman Hinterlong, thought he had heard enough after just a few speakers, and the others didn’t need to be heard,  even though 11 speakers took the time to come to the meeting in order to get their three minutes of speaking time. That might be considered disrespectful towards residents at the least, and most likely snobbish to most watching and listening.

So if councilman Grant Wehrli is the ‘poster boy’ for snobbiest, who would be the ‘poster girl’? That would have to be Naperville council woman Judy Brodhead since she is the only non-male on the council, and because she clearly qualifies as helping ‘the snooty rule the city’.

Watch and listen to Brodhead, as she discounts the speaker’s source (a blog) regarding the topic of ‘puppy mills’, again during the public forum portion of the meeting.

So let me get this straight, information is worthless, unless it’s sourced from the city website, or the ’10th council member (local newspaper). We can only imagine that councilwoman Brodhead still tries to get her pictures developed at Woolworth, rents films from Blockbuster, looks for coupons for Ben Franklin stores, waits for the ‘yellow pages’ to be delivered, and uses a rotary phone.

1 thought on “Who Is The Snobbiest Snob Of Them All?”