A couple of weeks ago, an out-of-state friend called me and wanted to get together for lunch. I suggested a couple of places in downtown Naperville, and he didn’t want any part of that. Traffic congestion doesn’t appeal to him, and he had read on-line that there was another ‘dust up’ outside of one of the more respectable restaurants in the downtown area. Since Rt. 59 is also congested, I suggested he find something on Ogden, and I’d meet him there.

The ‘dust-up’ he referred to involved apparently another alcohol-fueled assault in the downtown area on Jefferson . After the dust settled, an individual was apprehended and charged with aggravated battery, resisting and obstructing a police officer causing injury, fleeing and attempting to elude a police officer in a motor vehicle, reckless driving, disorderly conduct, a couple of counts domestic battery, and another half-dozen or so traffic violations. Other than that the individual was well-behaved. Naperville city officials still insist that alcohol related beat-downs in Naperville are grossly exaggerated. Hence it’s possible this ruckus was caused by a sugar-high from being over-served ice cream.

As things turned out, my friend had a change in schedule and couldn’t stay for lunch, but he said, ‘you’ve got to come here and see this’. The “this” turned out to be a shrine for Mayor Pradel. It’s located in Braconi’s Restaurant and Pizzeria on Ogden near Royal St. George. The mayor doesn’t need a statue like Joe Naper because he has a shrine. It’s a separate huge room within the restaurant with all sorts of memorabilia and accolades for the mayor.

When I first saw it, I didn’t know if I needed to pay admission to see everything, or take my shoes off, or say an oath of loyalty, or genuflect before entering. Whether you agree with the mayor on policy or not, he has provided years of service to Naperville both as a police officer and as mayor. As for the shrine, it might be a bit ‘over the top’, however it beats another statue. 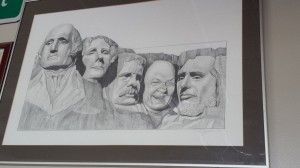 If you’re looking for something to do with the kids and family rather than starring at another statue, I encourage you to head to Braconi’s and gaze at the shrine. Additionally they offer a full menu, excellent service, and the owner is very active in the community. They do serve alcohol, and considering the mayor is the commissioner of the liquor commission, it’s probably wise that the shrine and license are on opposite ends of the establishment Wouldn’t want anyone to get the wrong idea. It’s probably also wise that the mayor’s shrine is not located in an establishment in the downtown area. Just imagine a dust-up within that shrine.