Imagine watching a baseball game and it is the bottom of the 9th inning and the game is tied; you have no idea who is going to win, but you definitely want to see who is going to prevail. Let’s say it’s the Eagles against the Vultures.

Furthermore imagine the Vultures have the umpires on their side, along with the official score keeper, and scoreboard operator, and the commissioner of baseball. That’s just about a no-win situation for the Eagles, however  the Eagles get what looks like a game winning hit (even against all that stacked opposition), and before the runner can score the winning run, a fan-supporter of the Vultures, yells out “stop the play, I object, the ball doesn’t look like it’s round” and play is stopped.

The Vulture-fan calls in a paid-for-hire pigeon to delay the outcome of the game. They subpoena the ball stitchers; the good folks who stitch the balls and work for free because they believe in the goodness of baseball. The Vultures hope that the game will be delayed long enough that it cannot be finished and the Vultures win by default.

Well that is exactly what is happening in Naperville, except rather than it being a game of baseball; it’s the citizens of Naperville who obtained over 4000 signatures trying to get a non-binding referendum on the spring ballot with regard to stopping the installation of so-called Smart Meters. The Naperville city council is hell-bent on getting the meters installed and welcomes every tactic possible to silence the citizens who oppose the meters. The Naperville Smart Meter Awareness group basis its opposition on the excessive expense that the city can’t afford, health concerns, along with security and privacy issues.

From a city of over 140,000 citizens, one person objected to the petitions submitted, and needless time and expense have been wasted looking for any reason possible to delay and stop the referendum from being placed on the spring ballot. 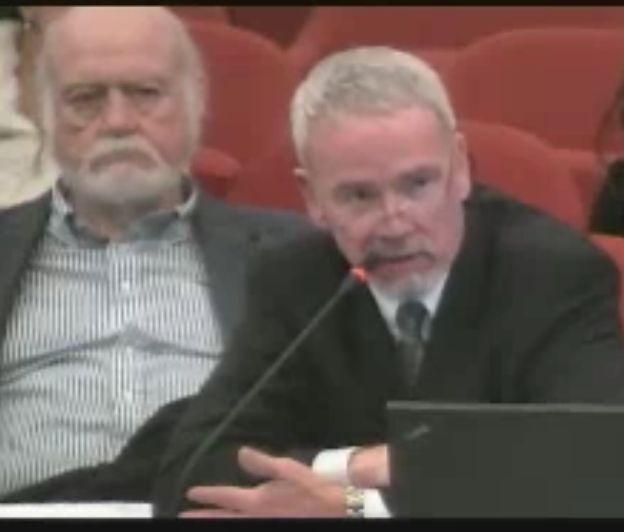 The bottom line is that the city of Naperville does not want the non-binding referendum on the ballot. They learned the lesson of not underestimating the intelligence of Naperville voters when they allowed referendums for term limits and district representation to be allowed on ballot. The results of the vote came as a major surprise and huge embarrassment to the Naperville city council when citizens voted to approve term limits and district representation by a landslide.  The lesson learned was do not let residents vote for what residents want.  Based on that, is it any wonder why the city is fighting so ruthlessly to keep it off the ballot.

Listen and watch as attorney Doug Ibendahl (representing the Naperville Smart Meter Awareness group) tries to present a legitimate question to petition-circulator Amber Schaedel who was subpoenaed to the hearing, however attorney Ibendahl is rudely interrupted by Naperville city attorney Margo Ely who does not want the question to be asked.

Now look at the following video during a Naperville city council meeting in November of 2010, and you will see why the city preferred that the question not be asked as council member Steve Chirico, “insults” citizen Amber Schaedel regarding her petition circulation endeavor.

In addition, how does petition-circulator and citizen Jerry Schilling feel about being subpoenaed for the Naperville Electoral Board hearing? Let’s watch and listen.

Here is a short list of how the city of Naperville has stacked the deck against the fine citizens who reside in Naperville:

Can you see where we are going here? You would think we would be talking about 25 different people; however, it’s basically the same group comprised of Naperville city council members, the city attorney and the Mayor. The city of Cicero must admire how the city of Naperville ‘stacks the deck’.

Now for those of you thinking, “the heck with it, I think I’ll just open a bar in Naperville” then prepare to meet with the liquor board commissioner who just happens to be the Mayor of Naperville. You may have to wait though because he might be leading a city council meeting, or electric utility board meeting, or listening to frivolous petition objections from one lone objector.

3 Responses to “Naperville ‘stacks the deck’ against residents”