Who paid for that?

The Naperville city council meetings occur the first and third Tuesdays of each month, unless council members are dismissive of agenda topics that are not that important such as citizen concerns about Smart Meters, district representation, or term limits, and they want to take the night off as happened on July 5 and August 2. I imagine they feel no sense of urgency on topics that citizens see as important.

Meetings can be viewed on TV or live on-line, however when you attend meetings your peripheral vision absorbs so much more that can’t be seen on TV or on-line. Additionally you hear or can be involved in some very interesting discussions in the lobby of city hall, which I will get to later in this posting.

It’s also very interesting when you watch the Public Forum portion of the meeting, and you see things in person that you just do not see electronically. The Naperville city council has a rule that speakers are given 3 minutes to make their presentation. If a citizen presents a topic that the council doesn’t really want to hear, they watch that 3-minute clock very closely as they did when two members of the Naperville Smart Meter Awareness Group (Joanne St Ives and Jennifer Stahl) made excellent presentations during the August 16 meeting. You could almost see the council waiting for the timekeeper to interrupt the speaker at exactly at 3-minutes. However, both speakers did not give the council that pleasure, since each spoke for slightly less than 3 minutes. However when Chuck Schlabach (a so-called supporter of the meters) spoke he was given almost 4 minutes to state his or the city’s case. Later in the evening, on a different topic, former council member Dick Furstenau was given a total of four and one-half minutes to speak with only one cursory polite interruption from the timekeeper. It appeared the city council applied the ‘good ole boy’ rule for Furstenau since he was one of them for far too long. A classic double standard. Additionally if speakers present points of view that council members embrace, they are given the full attention by the council including clear eye contact and leaning forward towards the speaker. If the speakers are presenting topics in opposition to the council’s wishes, the council members are fumbling through papers, leaning back, looking around the room, looking at the time keeper, looking at the clock, and sometimes either talking among themselves or on two occasions actually dozing off.

Chuck Schlabach presented himself as an “Ambassador” for the Naperville Smart Grid Initiative. The word ‘ambassador’ by definition is “an accredited diplomatic agent of the highest rank, appointed as the representative of one government or state to another”. Therefore, the city of Naperville is taking some poetic license when it labels these folks as ‘ambassadors’.  There is another word that more accurately is defined as “a person who accosts or solicits in order to influence action in the interest of a special group” and that word is ‘lobbyist’. In this case, the ‘special group’ is the city. They need somebody, anybody to speak up for the Smart Meters. There are signs throughout Naperville in opposition to the Smart Meters, however it’s next to impossible to find signs supporting the NSGI. You might be hard pressed to find a sign supporting Smart Meters at a council member or ambassador’s residence. We haven’t seen any. You would think that since the city handed over $1.35 million to PR firms to help quell opposition, the least the PR firms could do is recommend some signs for the front yards of council members and those specially city-trained ambassadors. 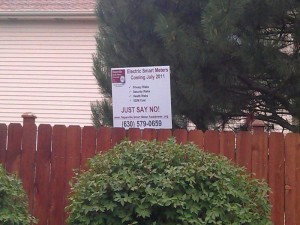 Since it was very difficult to find anyone (outside of the city council) who supported the (not-so) Smart Meters, what better way to do it than to train a group of well-intentioned folks to become ambassadors or czars, or lobbyists for the Smart Meters. It appears the thought was, if you can’t find them, just create them.

Listen and watch as Mayor Pradel states the 3-minute rule and then Chuck Schlabach as he presents the Naperville city council’s point of view as the view of the ‘ambassadors’. Please note:

After Ambassador Schlabach’s presentation, I asked him if he would mind if I asked him a few questions in the lobby and he graciously accepted. I asked if he was aware of the fact that the city of Naperville stopped some members of Naperville Smart Meter Awareness group from circulating petitions in opposition to the wireless Smart Meters during the weekend of the Ribfest, and he said he was not but he would find out and contact me. I asked him if he was aware of the letter from a member of the same group dated June 13 to city manager, Doug Krieger outlining well thought-out questions concerning the Smart Meters including one specific question, which Doug Krieger did not answer and if he knew why it was not answered.  The question was “Is there anyone on the city staff or city council who is personally, professionally, or politically benefiting from the NSGI project?”  He said he didn’t know why it wasn’t answered but that he would find out and get back to me. It has been more than a week and I am still waiting for answers. Now I do not find fault with an ‘ambassador’ not having answers though he did say during his presentation that he wanted to ‘educate the community’ and ‘get the facts out’. However I do find fault with the city of Naperville for sending ‘ambassadors’ out on the street without preparing them to answer questions.

I then ventured over to a group of folks from the Naperville Smart Meter Awareness group in the lobby (none of whom were wearing name badges) and began to chat and listen to them. Within a few minutes, ambassador Schlabach, to his credit, came over to join the conversation, though he did spend more time talking and ‘educating’ than listening. He again said he wanted to help educate the citizens of Naperville to the benefits of the Smart Meters. I asked him if he was willing to arrange a ‘Town Hall’ meeting along with the Smart Meter Awareness group to ‘educate’ the citizens. He did not respond. I asked again, and he said he would get back to someone; I have not heard from the ‘ambassador’.