April 19 marked the last Naperville City Council Meeting for this City Council’s members. On May 1st two new members will be added and two will depart.

May 3rd will be the first seating of the new Naperville City Council. Now granted 7 of the 9 will still be the same, however whenever you add two new ingredients to a recipe, it invariably changes the flavor the outcome. So the citizens of Naperville will soon have a chance taste-test the new flavor.

It’s fascinating sitting in the peanut gallery (general seating) at council meetings because you can see and sometimes hear so much more than if you were looking at it online.

So with that being said, and borrowing the Top-Ten List concept from David Letterman, let’s take a look at the Top-Ten observations from Tuesday’s meeting:

When it comes to the distribution of SECA funds (Special Events and Cultural Amenities tax fund), the City Council can’t give it away fast enough, unless it’s late at night at the end of a meeting and the Council members want to get out and get home. At that point the dollars start to fly out. And what’s really interesting is how the council members refer to ‘giving haircuts’ to groups asking or needing support. In other words cutting back on what the recipients need or ask for. Now I suppose using the term ‘giving haircuts’ used in open session is probably far better than the terms they may use in ‘closed’ session, but they definitely do like option of giving ‘haircuts’.

During open forum three Naperville taxpaying citizens gave their 3-minute presentations opposing the continuation of the Smart Grid Initiative without the council giving additional consideration to a more desirable wired option. The City Council gave their almost undivided attention, and then you could almost hear their collective sigh of relief when the nine minutes concluded. You get the feeling the Naperville City Council can’t wait for this group to give up their effort, however you also get a stronger feeling that these folks trying to protect our community will not let the Naperville City Council off the hook. You have to admire the perseverance of those questioning the logic of using this wireless technology, when there is no opposition to a wired solution.

City Manager Doug Krieger apparently has a very difficult time conveying his thoughts without the annoying use of “uh” punctuating what seems like every other word he utters.

I tried keeping track by using hash marks on a pad of paper, but the new pen I was using ran out of ink. I think I’ll bring a couple of pens next time and try it again.

A good number of Naperville City Council members wore a bow tie in honor of Councilman Boyajian’s last meeting on the council. Only two (Councilman Fieseler and Councilman Furstenau) were seen at the beginning of the meeting without bow ties; it makes you wonder if they thought Councilman Boyajian should not be honored, or if they just didn’t read the memo thinking it was just another unimportant concern from some Naperville taxpaying citizen.

Even Councilwoman Brodhead was seen wearing a bow tie. And one point during the meeting she had to excuse herself from the topic being discussed in order to not have a conflict of interest. Upon returning to the dais after the discussion you could hear one of the Councilmen say “she looks like a cocktail waitress”. Most companies would see that type of remark as an invitation to require the person making the remark to have a ‘sit down’ with the HR department and schedule some sensitivity training, but  this is the Naperville City Council, not a member of their staff. Now I must admit she did look like a cocktail waitress but I say that with all due respect to cocktail waitresses, and Councilwoman Brodhead.

Councilman Doug Krause was runner-up in the Mayoral election, which means he could be the front runner in the next mayoral election. He was proudly seated for most of the session with his bow tie on. If you plan on voting Krause for Mayor, you might want to take this image out of your mind when entering the voting booth. 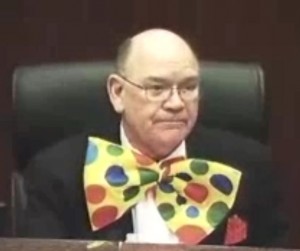 Mayor Pradel proclaimed April 20 as Councilman Richard Furstenau Day, and April 25 as Councilman Jim Boyajian Day. Now we could say that in honor of  Furstenau Day you should strike up a conversation with someone on a topic you have absolutely no knowledge about; and in honor of Boyajian Day you could do a verbal beat down on someone but we will refrain from suggesting that in order to not appear ‘mean spirited’. So instead we will wish them both well as they move forward.

What about those name plates in front of each council person’s seat..? What happens to them? Is that considered city property? Do both departing Naperville City Councilmen get to keep them, or will an ordinance need to be approved for that to happen?

And the # 1 and final observation about this Naperville City Council is that they still can’t seem to start a meeting on time.