If you want to get something done in Naperville, just find one person to complain about it, and the city council is more than willing to use heavy handed methods of regulation to force residents into complying. A few years ago one resident complained that a bee was in her birdbath which then lead the city council to place restrictions city-wide on beekeepers. The city council’s effort to make life more miserable for honeybees failed miserably. As residents learned more about honeybees, beehives became more prolific, giving nature’s little friends more of an opportunity to help residents and nature.

The newest one-resident complaint involves 19 stand-alone driveway aprons in one neighborhood. An apron is the small area between the curb and the sidewalk. A property owner had parked on the apron which initiated the complaint. Naperville code allows parking on the apron as long as the vehicle does not overlap the sidewalk, even by 1/4 of an inch. Other than one person, neighbors in the area have no problem with the ‘offender’.

Enter the conversation at the dais, with solutions to the horrific ‘problem’, Naperville councilwoman Judy ‘chickens don’t bark’ Brodhead. Watch and listen as she advocates for ticketing the vehicle (into submission) followed by her incredibly creative idea of encouraging residents to purchase tiny little cars that can fit into the little tiny space. 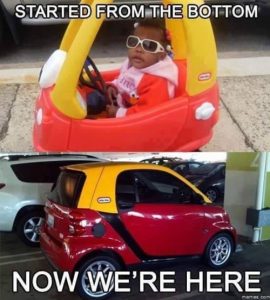 Pay special attention at the end of her suggestion when she seeks affirmation which is met with silence, at which time she responds with “what are you going to do, say no to me”.

She will forever be remembered for her ultimate bit of wisdom when she said:

No one will say ‘no’ to her on that one.